Every year, we interact with hundreds of pre-med applicants who are eager to gain admission to medical school and take the next step in their journey of becoming a doctor. Unfortunately, there is a great deal of misinformation resulting in several common pre-med mistakes that hinder their chances of getting accepted. Here are the top 6 mistakes to avoid, and what you should be doing instead.

1 | Applying When Not Ready

A surprisingly common mistake amongst pre-meds is going through the application process without actually being ready. Applicants often decide to apply one year, knowing full well that they may not get accepted and that they would be a stronger applicant by waiting one year. But hey, if it doesn’t go well, they can just apply the following year with a bit of practice under their belt. Seems like a good idea, right?

This is actually a terrible idea for multiple reasons:

First, and most obviously, it is a significant waste of money. When you apply to medical school, you’ll be using the American Medical College Application Service, also known as AMCAS. This is a common application you fill out once and send to multiple schools, and it’s the first step in the application process, thereby called the primary application. In 2019, AMCAS costs $170 for the first school and $39 for each additional school you apply to. With the average applicant applying to 15-20 schools, that brings the total cost between $755 and $911. But that’s just the primary application fees. After receiving a primary application, most schools also require a secondary application requiring additional essays, which is often subject to additional fees, which vary by program. There are then additional fees for submitting your transcript and letters of recommendation from your college. Then there’s the interview process, the cost of which adds up quick between airfare and lodging. In total, it’s safe to say you’ll spend more than $2,000 or $3,000 just to apply to medical school.

Second, the application process is not something you want to do more than once. Certain aspects, like the interview process, are particularly fun and rewarding, but most if it is quite tedious. You’ll be writing countless essays, handling the administrative aspects such as score reports and letters of recommendation, and likely finding yourself somewhat stressed during the process.

Lastly, and most importantly, being a reapplicant decreases your chances of acceptance. If you apply and don’t expect to get in, understand that next year you’ll be earmarked as being a reapplicant. Schools will know you applied in the past and didn’t get in. You’ll now have to overcome the additional hurdle of explaining how you’re an improved applicant this cycle and why you deserve a second chance, which will also require a complete rework of all your essays. This is a position you should avoid if possible. That being said, if you do find yourself as a reapplicant, our team specializes in finding the weak spots and crafting a compelling narrative to your medical school application to maximize your chance of an acceptance. We’ve helped dozens of reapplicants ultimately become successful medical school matriculants and we have the highest satisfaction rating in the industry.

Now rather than applying to medical school and expecting yourself to reapply next year, it’s best to strengthen your application and apply just once. Apply to win, apply to get in. Don’t shoot yourself in the foot.

2 | Going Caribbean When It’s Not Necessary

To get a more in-depth understanding of the pros and cons of going Caribbean, be sure to first watch our video covering the truth about Caribbean medical schools. I’ll give you a hint, there aren’t many upsides.

Rather than going the Caribbean route, we advise most of our pre-med clients to do two things: first, work on strengthening your medical school application. Most applicants are surprised how much can be done in a single year. And second, apply to D.O. schools if you are unable to secure a U.S. M.D. acceptance.

For most students, I would recommend going Caribbean only after one or more failed attempts at applying to U.S. allopathic and osteopathic medical schools.

If you were to check the application deadlines for most medical schools, you’d find dates listed between October to even February of the next year. Does that mean you’d be fine to apply any time before that? Absolutely not. Applying early is one of the most important medical school admission strategies. Why is this?

Unlike college or university admissions, most medical schools follow a rolling admissions process, meaning applications are reviewed sequentially as they arrive. If you are late in submitting your application, many interview slots may already be filled, and now you’re competing for a smaller number of open spots. You may even find yourself in a position where you don’t make the cut, but would have been offered an interview had you applied earlier.

AMCAS opens up for data entry in early May, with application submissions opening in early June. Once you hit submit, your app isn’t immediately sent to medical schools. AMCAS first has to verify your application as well. If you submit early, expect the verification process to be relatively quick. If, however, you wait until July, it can take several weeks.

My general recommendation is to apply as soon as possible, ideally within the first two weeks of June. July is not optimal, but is fine in most cases. Applying in August is borderline, and September would be considered too late. Of course, exceptions exist, and that’s something that our advisors can take a look at with 1-on-1 guidance.

It happens every year. A student with stellar numbers, a 3.99 GPA and 99th percentile MCAT score doesn’t get accepted. Usually, they have very few interview invites, which points to poor primary and secondary applications. Less commonly, they can have several interview invites but no acceptances. This points to weak interview skills.

We had a few students approach us who were in this exact position. After working with us, they didn’t only get accepted, but are now attending prestigious programs. How did that happen? It’s a matter of understanding that the application is multi-faceted and your numbers are only a part of the whole picture.

A big part of an effective and optimized medical school application is conveying an effective narrative as to why you will be an excellent future doctor, an asset to the program, and bring value and diversity to the upcoming medical school class. Conveying this story starts with a nuanced and strategic personal statement, AMCAS application, and secondary essays. Congruence in the interview along this narrative is also required to get an acceptance offer.

5 | Not Understanding the Other Side

Tying in with the previous point, put yourself in the shoes of a medical school admissions committee member. They are bombarded with thousands of applications every cycle, yet they only have 100 or 200 seats to fill. Of all the hundreds of highly qualified applicants, why should they pick you?

Imagining the perspective of someone from the other side is one of my favorite tools not only for medical school and residency admissions, but even as a strategy to perform better on the MCAT or USMLE Step 1. As a medical school admissions committee member, what would you care about? What would concern you or make you apprehensive about an applicant? What would you want to see?

Once you understand these principles, it becomes more readily apparent why certain elements and narratives are more effective in a medical school application compared to others. Demonstrating commitment to medicine, maturity, resilience, and the ability to handle the rigors of a medical school curriculum are going to go a long way in improving your odds. Effectively communicating these and other traits in a nuanced, indirect, and interesting way is going to be much more effective than claiming to be those qualities.

6 | Not Getting Advice from People With Adcom Experience

It’s great to have another pair of eyes looking at your essay, whether that’s your mom, friend, aunt, or mentor. Improving your writing is never going to be a bad thing. While effective story telling and writing skills are important, they’re just one element of the application and personal statement. You also have to consider what admissions committees are looking for.

Last cycle, we had a student with a relatively well written essay. The essay opened, as many do, with a personal anecdote related to medicine. While what was written was completely innocent and well intentioned, the physician advisor who was editing the student’s essay pointed out that the story used could remind some physicians of drug seeking behavior. A negative association like that is something you absolutely want to avoid in your personal statement. For those unfamiliar, drug seeking behavior occurs when patients present, most commonly to the emergency department, with the desire to obtain pain killers. It’s a massive headache and not something you want your admission committee member to be thinking of while reading your essay.

If you’re a reapplicant, it’s even more important to get this soft elements of your application right. The personal statement, AMCAS or AACOMAS or TMDSAS application, the secondaries, and of course the interview. If you need help, look no further than Med School Insiders. Our team of advisors has served on medical school admissions committees, so they know firsthand how to make an applicant stand out and how to get them accepted. You can learn more about our pioneering approach and why we have the highest satisfaction rates in the industry here.

Dr. Kevin Jubbal graduated from the University of California, Los Angeles magna cum laude with a B.S. in Neuroscience and went on to earn his M.D. from the University of California, San Diego as the sole recipient of the top merit scholarship for all 4 years. He matched into Plastic & Reconstructive Surgery residency at Loma Linda University Medical Center. He has authored more than 60 publications, abstracts, and presentations in the field of plastic surgery.Dr. Jubbal is now a physician entrepreneur, and his passion for medical education and patient care led him to found the Blue LINC Healthcare Incubator and Med School Insiders. Through these and other projects, he seeks to empower future generations of physicians, redefine medical education, and improve patient care through interdisciplinary collaboration.
All Posts »
PrevPreviousMedical School Application Mistakes – Common Offenders
NextSunscreen is BAD!? | The Science-Backed VerdictNext

This is the sixth article in the Dominating the MCAT Series – in these 9 articles, you’ll gain extremely detailed insight into the processes and strategies that Pranay Narang, an author here at MSI and one of the developers of the upcoming MSI MCAT Course, leveraged to dominate his MCAT. 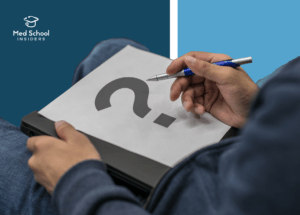 Why is the MCAT so difficult, what’s a good score, and when should you start studying? Read our MCAT FAQ for answers to 18 essential questions.

This is the fifth article in the Dominating the MCAT Series – in these 9 articles, you’ll gain extremely detailed insight into the processes and strategies that Pranay Narang, an author here at MSI and one of the developers of the upcoming MSI MCAT Course, leveraged to dominate his MCAT.