For medical school, you apply to multiple schools, hopefully get several acceptances, and choose the program you like most. For residency, it’s not so straightforward. Instead, you’ll be using the NRMP Match and its Nobel Prize-winning algorithm. Here’s how it works.

To properly understand how The Match works, we first need to understand the issues that it addresses. Before the National Resident Matching Program (NRMP), there was a straightforward traditional application system, just like you would use for applying to medical school. Back then, hospitals benefitted from filling positions as early as possible, and applicants benefited from delaying acceptances.

These factors led to offers being made for positions up to two years in advance before starting residency. In response, medical schools began to only release transcripts and letters of recommendation during the students’ final year.

Competition then took another form, whereby programs issued “exploding” offers, requiring the medical students to accept or reject a residency offer within 24-48 hours. There were other problems too. Competitive applicants would hold onto multiple program offers or would renege on accepted offers when a better one came along. Programs were pressured to extend early offers to secure the best candidates. In short, it was a mess.

Enter the NRMP Match, designed to promote an even playing field. It’s based on an algorithm first described in the 1960s, for which Lloyd Shapley and Alvin Roth were awarded the Nobel Prize in economics in 2012.

How the NRMP Match Algorithm Works

Let’s take a look at how this works in real life. Say we have five applicants and three residency programs, and each of them submits their own rank lists. The algorithm is applicant-proposing, meaning it prioritizes what the applicants submit, rather than the programs.

First, the algorithm will start with John, who ranked City first. City ranked him as well, at number two. He’s now tentatively matched at City. We say tentatively because if there is another applicant who is higher ranked at the program, the algorithm may bump the lower-ranked candidate, depending on the number of seats available.

Linda ranked Private first, but Private didn’t rank her, so the algorithm will go to her number two. She ranked City next, but she’s at number four, and the two seats are already claimed by applicants higher on City’s list. The algorithm moves to her third choice, General, and tentatively matches her there for now.

Mark ranks City first, and City ranked him first as well. A match made in heaven. This is a confirmed match, not a tentative match, as there’s no possibility for another applicant to be ranked higher at City. In doing so, Charlene got bumped off. The algorithm will try to match her to a second program, but Private didn’t rank her. She ends up going unmatched. In the end, this is what the final match results look like. John and Mark both ended up at their number one ranked program, so big congratulations to them. Zach and Linda didn’t match at their number one picks, but they still matched, and that’s a reason for celebration as well.

Unfortunately, Charlene and Private both end up going unmatched. You’ll note that both had shorter rank lists. This isn’t a coincidence. Generally speaking, you’re less likely to successfully match with a shorter rank list for two reasons.

First, statistically, there are fewer opportunities for a match to occur with a shorter list. Second, more competitive and desirable applicants are usually offered more interviews. Not only are they ranked higher on the program’s list, but because they attended more interviews, they have longer lists as well.

Rank lists are submitted by both applicants and programs at the end of February. Match Day occurs in the second half of March. It’s a formal celebration at all medical schools around the country. Students open an envelope that holds the name of the residency program they will be training at for the next 3-7 years.

If you go unmatched, all hope is not lost. During Match Week, you’ll be part of a process called SOAP, standing for Supplemental Offer and Acceptance Program. During this time, unmatched applicants and unfilled residency programs will connect. Oftentimes, these unmatched applicants will take on preliminary or transitional year residency positions, which last only one year, meaning they will apply again to residency during the next application cycle.

Read our SOAP Match Day Guide to learn more about SOAP, how to succeed if you don’t match, and what other options you have.

Now that you understand the basics of The Match and how the algorithm works, let’s debunk some of the common myths that lead applicants astray.

1 | Always Rank Every Program You Interviewed At

Since matching at a program is a binding commitment, it’s important to rank only programs where you would be happy to train. When I was applying to plastic surgery residency, there were a couple of programs I didn’t rank because I knew I wouldn’t be happy there. It’s ultimately a personal decision, and for me, I would have rather gone unmatched than train at those programs.

It’s also important to note that programs will only rank applicants they have interviewed, so there’s no benefit to listing programs at which you weren’t offered interviews.

Prior to 1995, the NRMP matching algorithm favored residency programs over applicants, such that it proposed matches based on the programs’ rank order lists rather than applicants. In a very small number of cases, applicants ended up at lower-ranked programs compared to if the algorithm was applicant-proposing.

Since then, the algorithm became applicant-proposing, which is good for medical students. It’s been this way for over two decades, and it’s time to quit with the conspiracy theories.

It’s important to weigh multiple factors to make the rank list that will result in you being happiest come Match Day. If any part of the process is rushed, a rash decision has a high probability of leading to regret.

Read our guide: Residency Match Day—Schedule and How to Prepare.

4 | Rank Programs Based On Them Ranking You

The most pervasive myth is that the order of your rank list should be dependent on where you think you have been ranked highly, rather than your true order of preference. By understanding how the algorithm works, it becomes clear that you should rank programs in your order of preference, meaning if you want to go to Prestigious Program X, rank them number one, even if you think they didn’t rank you as highly.

Trying to outsmart the system by ranking a program higher because you think they also ranked you higher doesn’t actually improve your match outcomes—it’s actually just more likely to result in you going to a program you’re not as happy with.

The only time this sort of game theory actually comes into play is under two conditions, both of which must be met. First, you’re applying to smaller specialties, like plastic surgery, ENT, interventional radiology, and several others, where the faculty and programs are well connected. And second, you or your advocate informs your #1 ranked program that you’ve ranked them as such.

There are several rules and restrictions around this, so only proceed with professional guidance. Programs like matching with students who have ranked them highly, and this can sometimes sway a program’s rank list by a couple of spots. It won’t move an applicant from the bottom of the list to the top, but it can move you from number 3 to number 2, and that can be the difference between you matching there or not.

This is a much more advanced topic that is dependent on multiple specific factors to each student, and for that reason, it’s not something I’ll discuss further in this guide. Rather, this sort of advanced theory and application of rank list strategies is best suited for one-on-one guidance from a physician with real experience on residency admissions committees.

I’m hoping this clarifies much of the confusion about The Match and rank lists. For anyone who is applying to residency soon, I wish you the very best of luck!

Applying to residency? Utilize our ERAS Residency Application Guide. The Med School Insiders blog is filled with articles for medical students, including a wide range of residency application resources.

Dr. Kevin Jubbal graduated from the University of California, Los Angeles magna cum laude with a B.S. in Neuroscience and went on to earn his M.D. from the University of California, San Diego as the sole recipient of the top merit scholarship for all 4 years. He matched into Plastic & Reconstructive Surgery residency at Loma Linda University Medical Center. He has authored more than 60 publications, abstracts, and presentations in the field of plastic surgery.Dr. Jubbal is now a physician entrepreneur, and his passion for medical education and patient care led him to found the Blue LINC Healthcare Incubator and Med School Insiders. Through these and other projects, he seeks to empower future generations of physicians, redefine medical education, and improve patient care through interdisciplinary collaboration.
All Posts »
PrevPrevious2023 Residency Match Day Schedule (and How to Prepare)
NextHow to Become a Medical Scribe—Is It the Right Extracurricular For You?Next 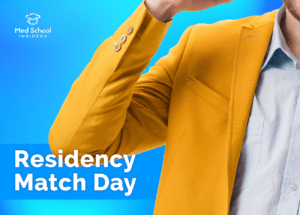 2023 Residency Match Day Schedule (and How to Prepare)

Learn what to expect on residency Match Day, how to prepare, the schedule of Match Week events, and how SOAP works should you not initially match.

We outline the residency application timeline you should follow, including key dates and an ideal month-by-month preparation schedule.